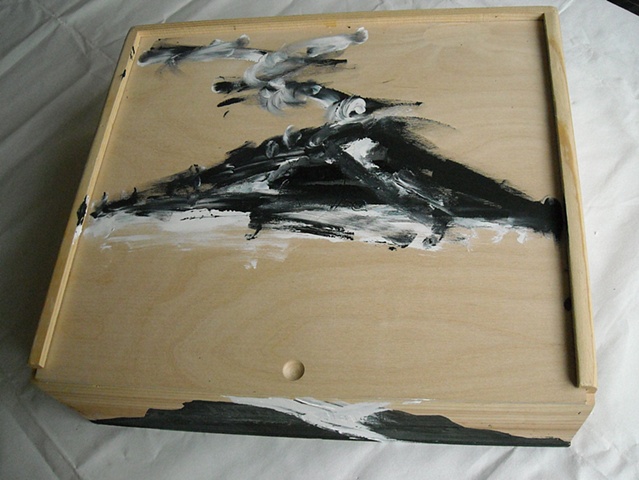 Multiple Edition Limited, signed and numbered copies, this is a hand bound book made of paper, paint, wood and ash. The printed photo images in this book are from my original paintings found in the unique edition.There are nine original paintings. They all refer to specific photos viewed on the U.S. Geological Survey website.

The images are horizontal and vertical and when bound into pages create an outer shape like a volcano. As the pages are turned, their layers of images refer to the layers of ash, dirt and debris that are in volcanic eruptions.

The first set of images in the book are prints of single paintings. The second group of printed images show the nine paintings in their combined arrangement. The borders of the single images are hand painted with several layers of white acrylic. These border layers are then scraped and peeled to reveal images below. The borders surrounding the images in the combined arrangement also have been painted with layers of white acrylic.. On these an acrylic wash containing actual ash from Mount St. Helens was then applied as an overlay. Then the ash overlay was brushed into the printed photograph images of Mount St. Helens. Here the components of ash and photo print inks are allowed to mix , react, change and become new substances and images.

The end papers are printed images from the seismogram issued on the day of the 1980 eruption. They are printed on vellum and photo paper.They are then glued to hand painted paper. The book cover is silk cloth over book board. The book cover images are hand painted on a plexiglass cutout and then pressed into final form by a matching top piece of plexiglass. The 'paint' is captured like field specimens between two glass slides.

Housing Boxed Edition Housed in a pine box, the book is supported by a structure divided into four compartments.

The first compartment contains a photoprint of the seismogram from the May 18,1980 eruption.

The second compartment holds a plastic bottle that, when held up to the light, reveals a printed photo of David Johnson, a USGS scientist who died at Coldwater II during the May eruption. Coldwater II was re-named 'Johnston Ridge' in his honor.

The third compartment holds 25 pick up sticks. They represent the downed trees left covered with mud and ash.

The fourth compartment hold three small plastic bottles Each bottle holds ash, and debris from Mount St. Helens suspended in a solution of Purell Hand Sanitizer. They are labeled 'Shake Me”.